Picoarmor or not to Picoarmor

A couple of weeks ago I ordered a sample pack of 3mm (that's 1/600 scale) desert war stuff for a project on Operation Battleaxe that I have wanted to do for some time. I am just not sure of the scale- 20mm is skirmish for me, 10mm I like a lot, but have contemplated 6mm and 3mm to get more models on the table and better represent the tank battles of the western desert at a battalion level scale.

I can't decide which scale to go with. In 3mm I can go with 3 models per base for about 1/2 the cost of microarmour, which is about 1/2 the cost of 10mm. I like the model density at 3mm, and the models are really quite good, but is it too small? You can only really drybrush and wash at this scale, the infantry are the size of a rice grain. I dunno, here are some pics: 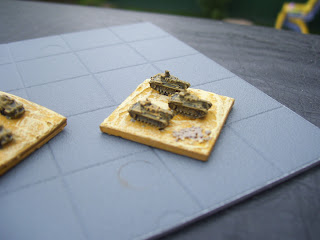 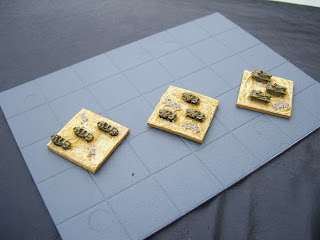 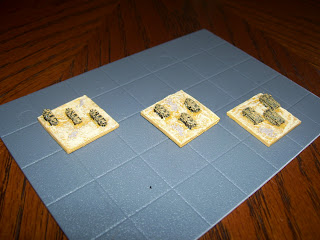 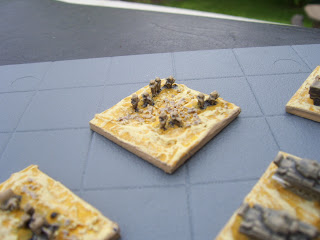 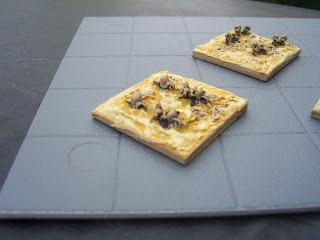 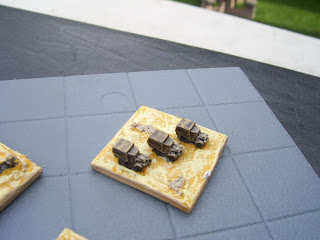 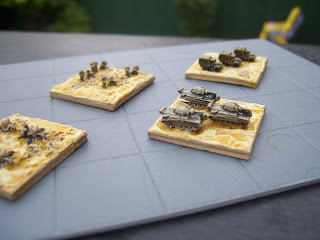 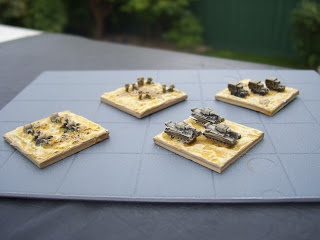 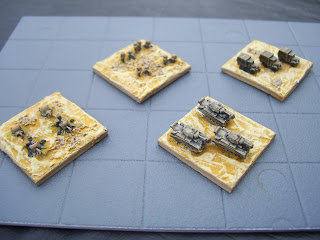 Any thoughts? I'm leaning towards microarmour because it is so nice to paint, this pico stuff is great but really small. 10mm would perhaps be my first choice but the cost might be more than I want to drop on a new project, and minifigs are no more. Picoarmor had awesome service by the way, I like the company.
Posted by Dave at 5:52 PM 5 comments:

On a whim, I dug out my 10mm WW2 stuff and finished off a bunch of minifigs models to run at the club this week using Blitzkrieg Commander, one of my old favourites. I did a 234/1 armoured car- love these 8-rads: 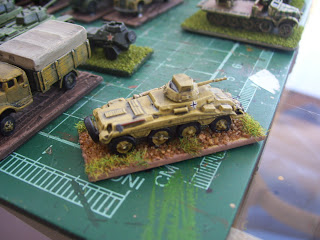 I experimented with winter white scheme for these T-34/85s, I like the way the models turned out, but since I don't have any snow flock we'll just have to assume it is springtime: 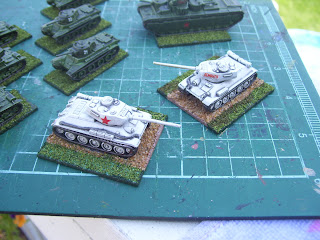 And here is a little treasure that has been on my to-do list for like 4 years, a T-35, one of my favourites of the pre-war silly-giant-tank era: 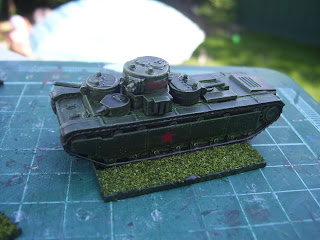 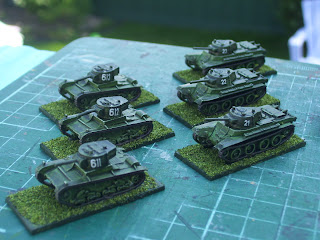 I also decided to base all of the tanks for this scenario, so here are the MkIIs and IIIs (1/144 Dragon kits- good stuff just a smidge bigger than 10mm) on new bases with basic flock: 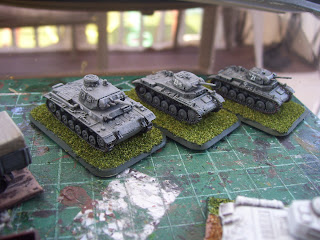 I am considering ordering the 2nd edition of Blitzkrieg Commander, but it's like $50 by the time exchange and shipping is factored in. I got my value in play-time from the first edition, so I suppose it is worth it.
Posted by Dave at 5:45 PM 5 comments:

I just finished a unit of mercenary horse archers for the El Cid project. These are Turkomen from Gripping Beast that were lovely to paint. 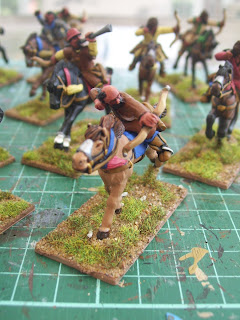 They will likely serve in a Moorish army led by this dark chap in the foreground who is a Almoravid general or emir: 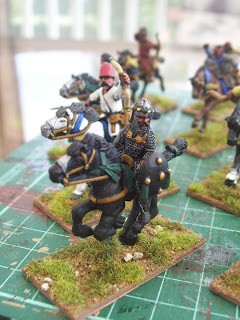 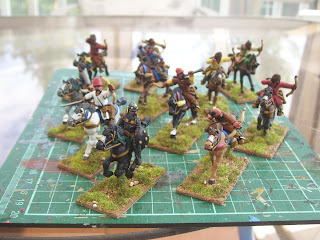 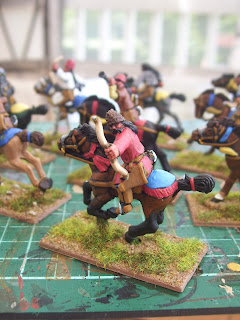 Likely will be quiet on the blog for a couple of weeks while I am off to Switzerland and Germany for some seminar and conference travel. Just when the weather here is finally nice... :(
Posted by Dave at 2:25 PM 2 comments:

The last 2 weeks have been busy, work is relentless and family were here visiting for a while, so the blog has suffered some neglect.

I did manage some painting however, and managed to complete a unit of mixed spear and bow 28mm Reconquista Spanish Christian Peones (Gripping Beast) for the El Cid project: 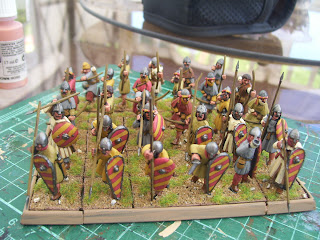 I enjoyed painting these, I love Gripping Beast except for the gimpy spear over the shoulder pose they sculpt so often for their dark age ranges, I much prefer the at guard pose mostly seen in the second rank. 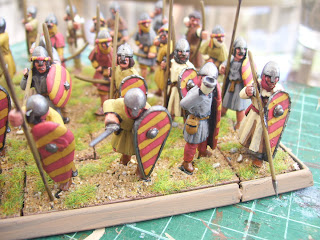 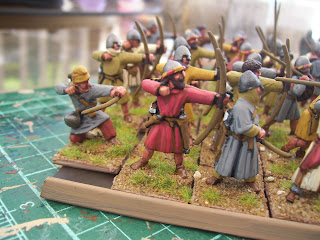 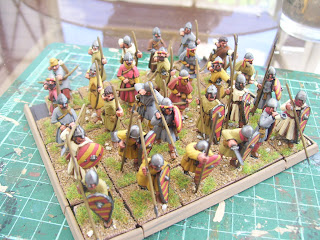 And a mixed bag unit of hard nut mercenaries for the same campaign, these are likely mostly Old Glory Crusades range, but I'm not 100% on all of them, they came in a Btown swap: 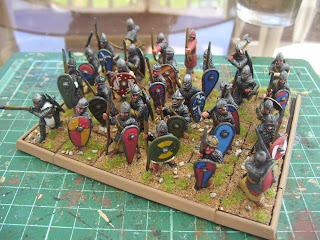 I also managed a couple of squads of 1940 French - my favourite theatre of WW2, dunno why, these are 1/72 Caesar which were pretty good, they do a great job with poses compared to other plastics: 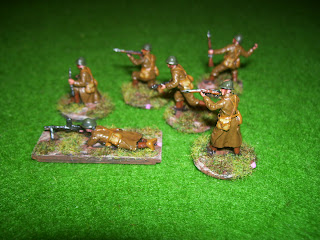 They are not as nice as these 20mm Blitz metals, however: 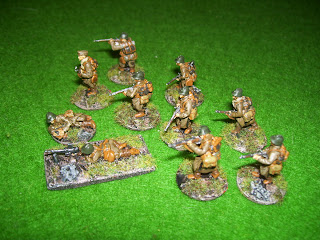 Something tragic about the 1940 campaign that I like, or perhaps it is all those cool French tanks and other early war, highly riveted, tin-cannage that appeals. These guys are getting trotted out tomorrow night for a club game of Fubar 1940. 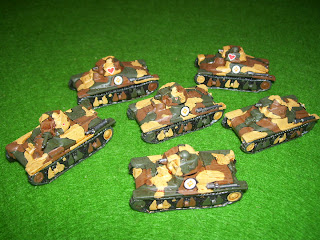