DBA on a rainy Saturday

Bob and his daughter Jessica came over for a playdate today, Jessica played tea-party with the girls and Bob and I managed two games of DBA. Bob brought his eastern Franks (7 knights, 4 spear and a psiloi) and I faced him with my beloved Dacians (Cavalry general, 2 blade, 2 psiloi, 6 warband and a light horse). This match-up is brutal for one side, depending on who gets the terrain. Bad going favours the Dacians, open terrain favours the Franks. Fortunately for me (good fortune being a major theme for me today) I was defender in both battles, so we fought on a board dominated by big blobs of steep hills and forest. 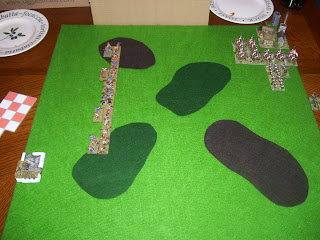 
Bob concentrated his deployment in the north corner and tried to run the north flank, 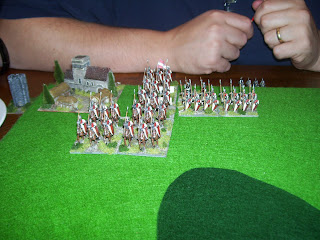 then he ran into a steep hill full of warband 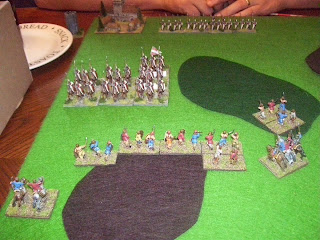 Two knights died horribly in the jaws of the terrain trap, then I ran out of pips and Bob skillfully reversed out of the trap and reformed in front of his camp. 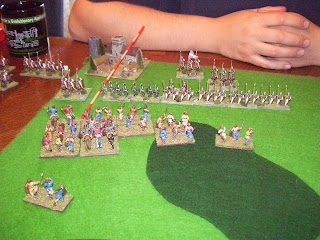 A tactical withdrawl that Rommel would have been proud of

I eventually caught up with him and formed up, I drew one knight forward with my light horse and the knight eventually died flanked, then fortunately for me his general ended up with his butt against the board edge when he filled the gap in the line and he died on a recoil.

The second game was dicier, similar deployment, but Bob managed to run a schwerpunckt down my flank and a knight actually reached my camp- at this point in the game the score we 2:2 and he had a chance to win the game with a +3 to +3 attack on my camp. He rolled a 1 to my 5 and it was basically game over. Bob played well, but rolled poorly. But he was a wonderful sport about it, and the cursing was modest.

Good run for the Dacians today, they now have 10 wins to 3 losses. I don't understand how this army ranks as one of the big losers all-time in the DBA stats tables, I think they are very tough on their home turf and they have some nice punch (knight & blade options) to go with their warbands.

DBA is a funny game, I reckon the outcome is determined by one third terrain, one third tactics, and one third capricious dice. If this was true, even the best players probably only win about 2/3 of the time since they cannot control 2 of the 3 factors, they can only play good tactics and hope for terrain and 6s. Today, terrain and 6s were in my favour. It's not always that way. But chance is a tremendous attribute of the replay value of the game, because this is what keeps it interesting and guarantees that no two games are alike.

I think I'll poll this. Which of the three do you think is the major factor determining DBA outcomes?

- the army's fit to the terrain
- tactics
- dice 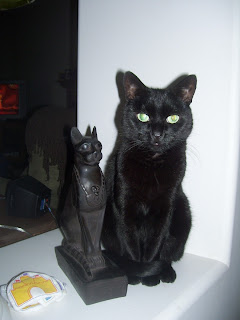 
I just finished a big batch of British Peninsular infantry and Rifles for Black Powder. They make up 6 battalions of foot and 2 battalions of rifles: 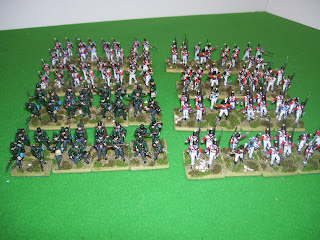 The rifles are the Italeri 1/72, not bad, good variety of poses: 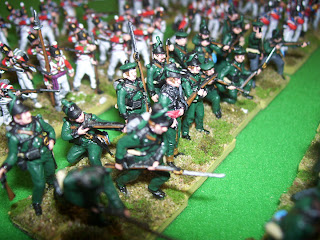 And the foot were the new Hat box set, these are really very nice, comparable in quality to the French set I painted earlier: 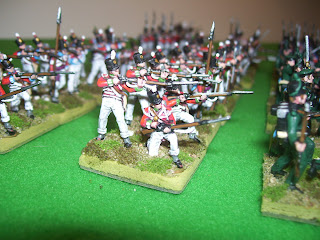 I'm getting close to having the order of battle for Vimiero done. I still need a regiment of light dragoons (ordered metals since cannot find plastics with Tarletons) and to paint up another regiment of French dragoons.

The other thing on my to-do list is a Persian army for HOTT. I have been looking for an excuse to paint a 1/72 Persian collection up, and Wall got me onto the idea of playing HOTT. I think my first army will feature a behemoth (war elephant) some scythed chariots (knights) cavalry (riders) and lots of bows (shooters).
Posted by Dave at 5:03 PM No comments:

Italian allies for the Punic Wars

This week I finished off a box of Italian allies for the Punic War (1/72 Hat). This set has quite a nice variety of poses and shield types. It also gave me the opportunity to finish off a bunch of shield transfers for Greeks and Romans. 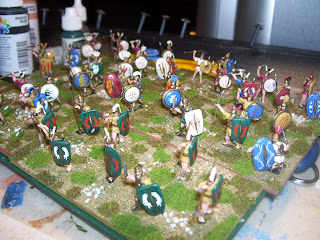 I struggled with the decision of whether to make the stands varied in appearance, according to shield type, colour, etc: 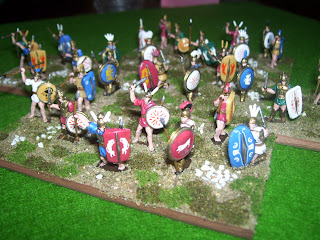 Or whether to make them more uniform, so that each stand represented forces from particular area: 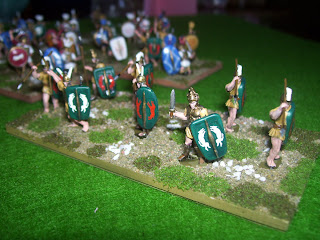 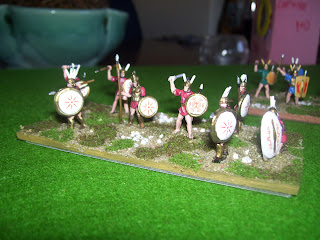 I dunno, what do you guys think? I think I like the variety style basing for these troop types, whereas for Romans or Napoleonics I prefer to keep more uniform pose composition on each stand.
Posted by Dave at 10:06 PM 1 comment: