Today I knocked off the lifeguard cuirassiers of the Earl of Essex for Dave Sr. This is work I am doing in exchange for lead. I reckon Dave gets a pretty good deal since I paint one figure for each I receive in exchange. I wouldn't want to figure out how that works in terms of hourly wage...

They are Renegade, quite big, but they are very nice. So nice, I don't want to give them back to him... 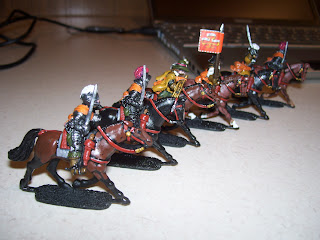 Dave just needs to base them and hit them with some dullcote, and away we go. 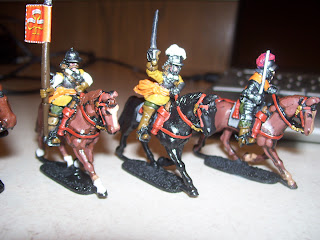 Last week I completed another regiment of Covenanter foot, these are Renegade figs, very nice figures, but also very large. 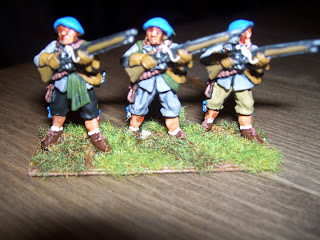 Although I think they don't match up too badly against Warlord plastics for size: 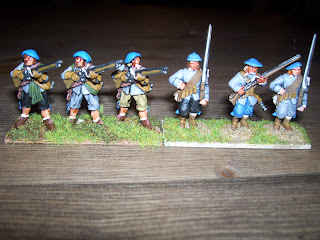 As much as I like the Warlord figs, these Renegades have better detail (deeper folds, etc) and look great painted. They weigh a ton though!

I also knocked off a DBA army this weekend. These are early medieval Poles, a very nicely balanced army with knights, bow, spear and a few other bits. 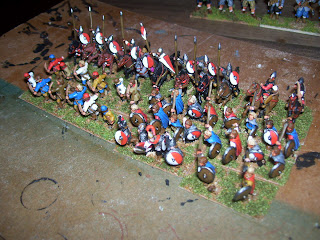 I might manage another mounted ECW unit, this time cuirassiers, for Dave later this week, but on Friday I am flying to South America for a weekend conference in Chile. So back again in October..
Posted by Dave at 11:35 PM 2 comments:

Over the last 10 days I have been knocking off some ECW stuff for Dave Senior in exchange for metal, so far I did a cavalry unit for him and am working on a greencoat infantry unit (Parliament), these are Foundry figs, a bit small and not as clean as some I have worked on... 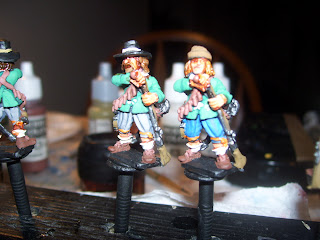 Here are some Old Glory Highland cavalry I received in exchange, this is a really nice line of figs, great animation, lots of character, nice horses. I like the fella waving the pistol butt 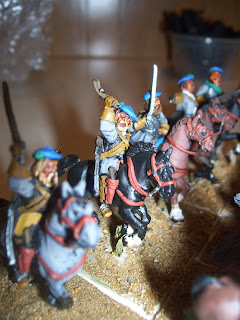 I also painted a Warlord games Montrose figure that I quite like, I am leaning towards a Montrose-themed Scots army for myself 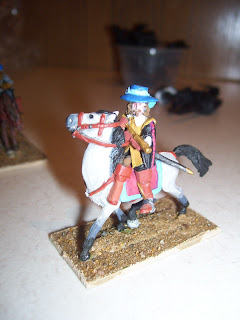 And some Warlord plastic ECW cavalry done as Scots lancers. Boy, these are great figs, I really like working with the plastics, they take paint so well and are easy to work with, convert, etc. 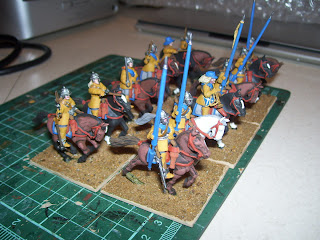 On another note, first turn of the 1066 DBA campaign kicked off and I ended up with one additional territory out of Mark's hide, but on balance Bob was the big winner after picking up 8 prestige points by some canny play and timely 6s. Not sure I would want to be the frontrunner so early on....
Posted by Dave at 10:59 PM No comments:

Kevin and I had a go at WHFB today, 1250 points of my Empire versus his Lizards. The synopsis:

- Stegadon stomps Flagellants then gets a cannonball between the eyes
- Saurus runs into the pointy end of a large halbard block after getting shot up badly
- Skinks run circles around Swordsmen and are the only surviving reptiles at the end
- Slann casts a couple of humdinger spells then self-immolates on a miscast. Phew!

What a blast, from my perspective, gunpowder is good, but I need to learn how to counter some of that powerful magic. The Arch Lector was very useful, until he died. It was a close run thing.

I finished some more handgunners and swordsman over the weekend. It is interesting to compare the different eras of GW figures. Here we have 3 generations of swordsmen, from left to right, oldest to newest: 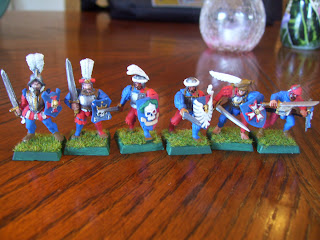 They clearly trend towards larger swords, more dynamic poses, and lots more bits of esoteric details like scrolls and skulls. The animation is mostly good, but I don't care for the extra bits of fluff. 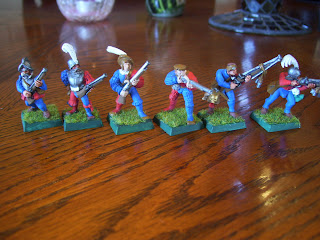 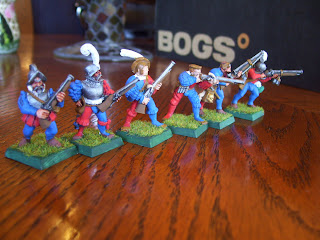 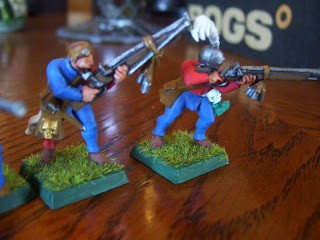 Again, more dynamic poses, but they are trending towards the Village People with some of the fluffy bits, big silly guns and over-animation. I think on balance I like the previous edition (middle figures) the best.