Today Mark and I tried a game of DBN using my 1/72 stuff. I ran a scenario for the battle of Vimiero, Nosey's first victory in the Peninsular. Mark played the British and I took the French 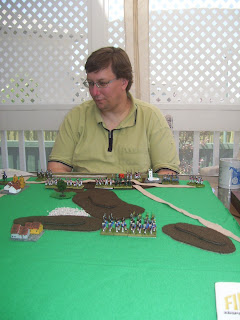 Mark, wondering what to do next.


The scenario favours the British, there were roughly equal forces and Nosey had good defensive terrain, Junot tried a right hook flanking manouever and the objective (Vimiero) is on the left. 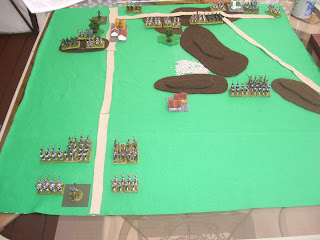 I advance the right to draw off as many rost-boeufs as possible, then moved the left flank strike force forward in two assault columns of regulars and converged grenadiers with artillery support. 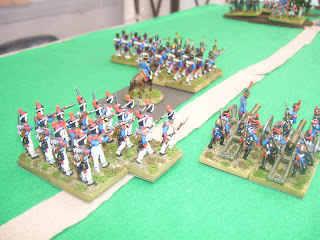 The left flank advance on Vimiero 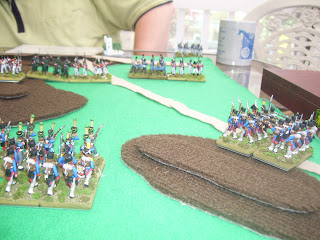 The right flank advances to draw the British away from the main attack, in the background can be seen Mark's cup of hot coffee. It was 26C today. Mark is from Newfoundland. The only other Newfie I know this well also drinks hot coffee on hot days (my dad). 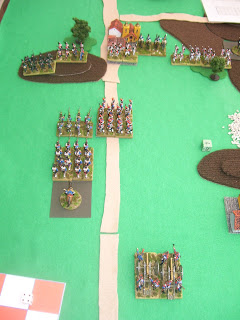 The French assault columns close in on the rostis. As fate would have it, they should have worn their bullet-proof underpantalons.


At this point, the British muskets opened fire. DBN has the uber-British rule, where all British are treated as elites for shooting. So they always shoot at +5 to my +4. This was a game winner for them, my formations were pushed back on their way in, arrived piecemeal, and even elite grenadiers died due to musketry before contact. Merde. 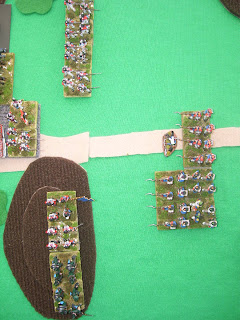 Assault columns tripping over dead comrades on their way to the British lines, where they were promptly hoisted onto their pig-stickers and shot in the derriere following the recoil.

So the French broke shortly after making contact. We tried it again a second time, and I did better getting the columns into actual contact. Then we rolled ones and died after recoiling and getting shot again.

This +1 for being British modifier in DBN is pretty devastating. It means the British should never melee unless the odds are overwhelming. +1 shooting is a pretty big advantage (50% better skirmishers, 25% better line troops) and I think historically unjustified. C'est l'arse. I hate games that do this "uber-mensch" kind of modification. The French just as often benefit from it (e.g. Shako) and it still sucks. I'll tell you, England sure as hell could have used that +1 yesterday in the World Cup against the Yanks....

I liked using DBA mechanics to play this game, but I am inclined to go with DBA-Hx next time perhaps.

Next up: I've lost my mind and started a new 28mm English Civil War project.
Posted by Dave at 9:00 PM