Over the 10 days I completed my first regiment of 28mm ECW infantry by Warlord. I really enjoyed this, these were excellent models, very crisp detail. 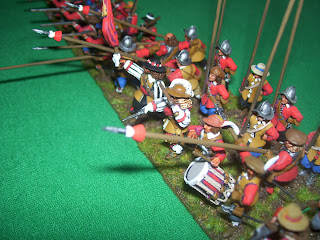 This was most of a box I received in trade, there are 2x 12 musketeers and 1 x 15 pike with command. There are a limited number of poses on the sprues, but the diversity of hats and bit of variation in colour goes a long way. 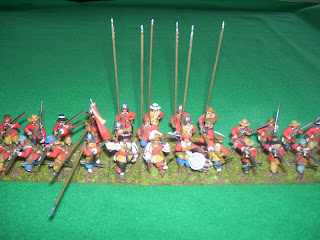 I especially like the commander with two pistols blazing 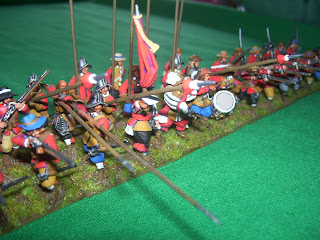 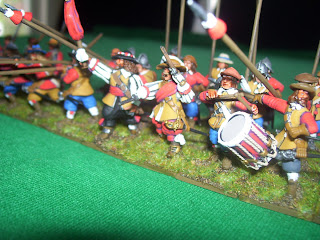 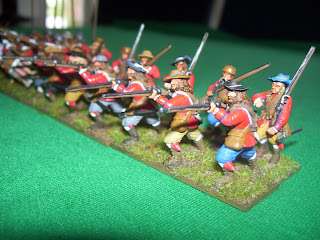 I wasn't sure which regiment (or even which side) to go with, for the most part they were very similar. Red was worn by both sides, although it was the colour that defined the New Model Army.

Since Mark has pledged to do Parliament I will start to work on Royalists, and since I don't trust Mark to actually finish an ECW army :) I will do Covenanters as well. I plan to start with armies for DBA-RRR, which looks like a very promising variant for the period
http://www.scribd.com/group/82216-dba-rrr-renaissance-reformation-and-restoration

I will build up to playing Warhammer ECW but also I am looking forward to the Black Powder ECW rules. Either of these options requires sizable armies...

So, I enjoyed doing these so much that I am going to buy/swap about $200 worth of Warlord stuff. So much for the pledge...

On the bench: A 1/72 Spartan army for HOTT/DBA until I get my hands on more ECW goodness.
Posted by Dave at 6:15 PM