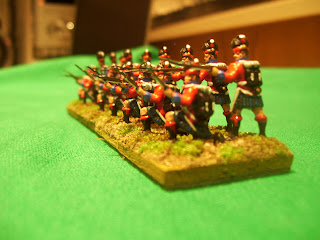 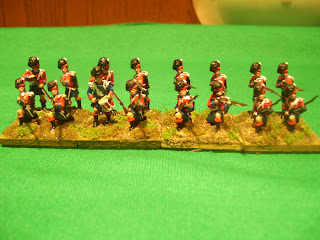 I painted 16 Highlanders in a firing line with drummer yesterday, I would eventually like to field these guys for a Waterloo scenario using the new Black Powder rules perhaps. They are not pretty figs, there is some flash and there are shortcomings in the sculpts (e.g they all forgot their canteens back in the bivouc I guess, plus the familiar musket droop). But, the highlander poses aren't bad and I kind of like them, and like most 1/72 they go pretty fast and look okay from 3ft. This particular batch was originally painted in enamels that had chipped badly, so I stripped them in Pine-Sol and painted them with acrylics after priming with Rustoleum spray primer for plastics. They are sealed with Future so could use some dullcote.
Posted by Dave at 11:58 PM