Scott come over today for a WHFB rematch at 2,000 pts. His daemons versus my shiny Bretonnians. My force was similar to last time with 40 longbowmen and trebuchet in the foreground: 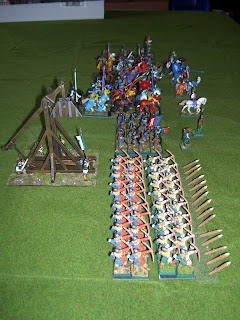 And 3 lances of knights, I also had a strong contingent of heroes and the lord: 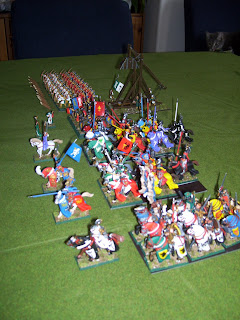 We rolled for a pitched battle and the terrain ended up like this, dominated by linear obstacles and a pit that churned out random spells at the far end: 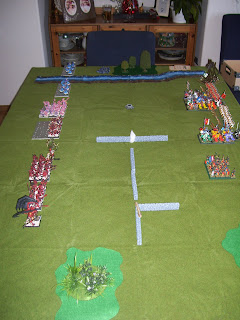 I deployed strong on my right flank with knights, bows and trebuchet, and hoped to refuse my left with the men-at-arms holding back the daemons as long as I could: 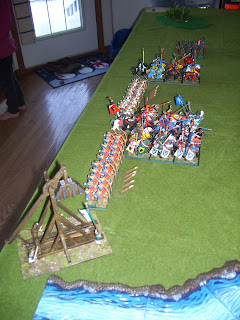 Facing my strong right were his flamers, gumbies and the bad doggies: 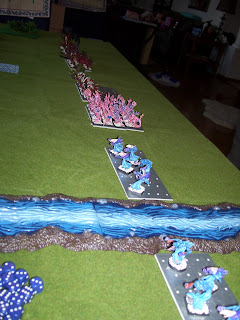 While the angry red guys and the daemon prince were on my left. Turn 1 saw him cautiously advance while I held my ground and faced the menace. I wanted him to move into charge range before punching forward, hoping that the pressure of longbows and trebuchet would keep him moving forward: 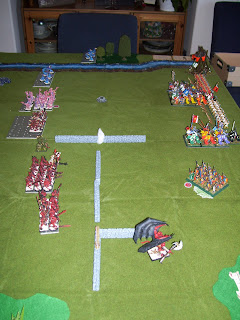 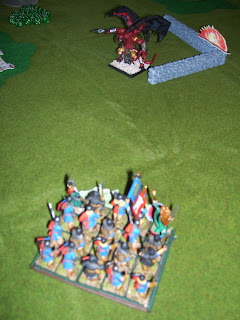 Turn 2 was supposed to be my big one, with all 3 knight lances charging. But it was a fucking disaster. Two of three charges failed, a damsel miscast, and the trebuchet misfired... 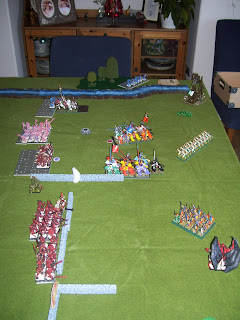 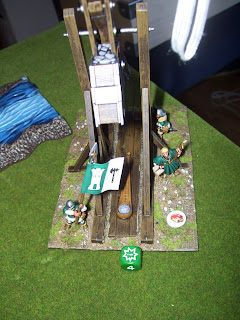 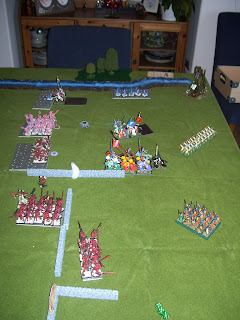 and a nurgle thingy charged my stalled knights of the realm, fortunately we won on combat resolution and there was a nice self-immolating break check that left him in a puddle of goo: 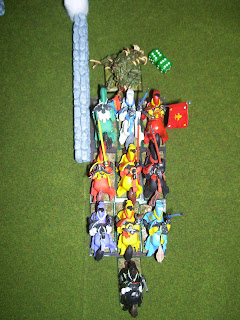 Turn 3 I completed the charges, the one successful questing knight charge destroyed one unit of flamers, but the second hopped along the bushes of the far board edge and fried both of my units of archers right off the board on single shots. Hot dice.. 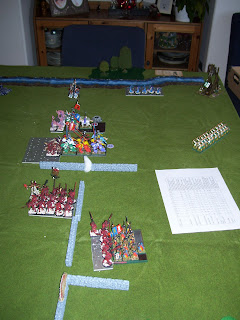 Meanwhile, on my refused left, the men-at-arms proved to be resilient and went toe-to-toe with some bloodletters for a while: 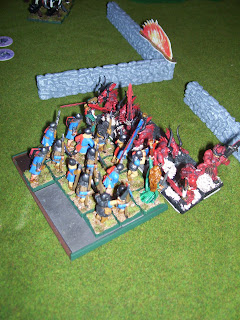 Until they were rear-charged by the daemon prince and ran for the board edge over a burning fence, incurring even more casualties. Fortunately, the pursuing bloodletters also caught their scrotes on the burning fence and somehow came up short in the pursuit. But there were only two of them left by now, and we rallied and turned to face in the next turn. 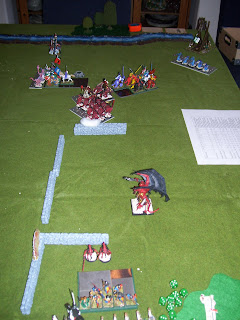 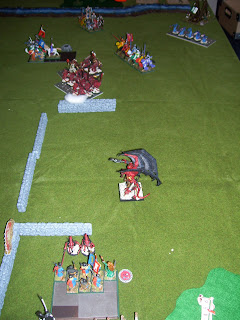 On the right, my grail knights eventually destroyed the gumbies, but the realm knights were defeated by a combo of bad doggies and angry red men 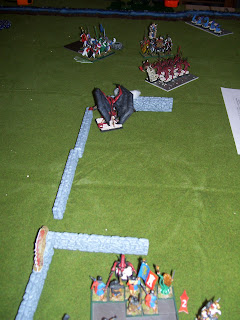 The last turn saw my surviving knights and characters facing his surviving angry red men and dogs. At this point I had high powered characters at the core of these units and felt optimistic. He charged my questing knights and my tooled-up paladin with a 2+ ward save against flaming attacks took on the skulltaker. What happened? He got two killing blow hits and I failed the 2+ ward save. Go figure, that was the game for me. On top of that, we nerfed a pile of easy armour saves against the flamers and the grail knights were roasted as well. The lady just wasn't with us today. 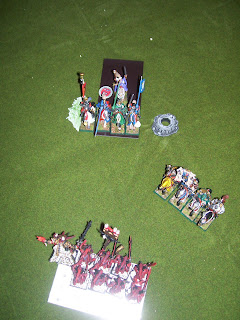 So we conceded. By this time my resident daemonette of Slaanesh had returned after an afternoon of swimming with the kids and was giving me dirty looks for not finishing up in time to make an easy-bake cake with the 5-year old nurglette.
Posted by Dave at 7:15 PM