Mark brought his Bretonnians over for another round of WHFB this afternoon and it was a bloodbath. I'm not sure if the lady abandoned him or his army list is paper to my elven scissors. 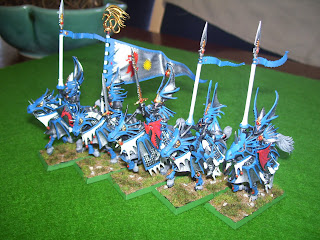 My list featured a lvl 4 High Magic and lvl 2 Metal wizards, tooled up with book of Hoeth, banner of sorcery and the annulian crystal. Nasty magic phases. I am starting to like High Magic as a lore, all the spells are useful, they are easily cast, and the list is versatile. Metal is a killer against Brets though, and Mark was horrified in game 1 when Final Transmutation went off and he lost 4 knights and a prophetess turned to gold on the first turn. Very deadly spell.

We replayed the game, and the second time around it went a little better for him since Final Transmutation only killed knights, but the speedy elven cavalry got behind his lances and shredded his bows, while his knight were afraid to charge
swordmasters and were pummeled by magic.

Brets really need Life magic to buff and save knights, but he also doesn't have any special or rare units to play around with either. Big blocks of knights are juicy targets for smug elven mages carrying around the book of Hoeth. Lore of Metal is like krytonite against knights as well. Feeling better about facing Daemons next, now that I am getting the hang of these pointy ears and dirty tricks. 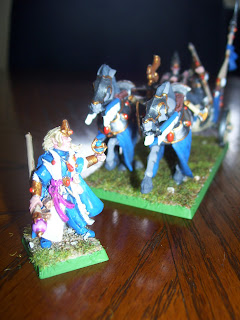