I ran out my ECW Auldearn game at the club this week. I gave the "Victory without Quarter" ruleset (http://www.quindia.com/studioart12.htm) a run-through with some modifications after a dry run at home. The scenario pits a force of Covenanters under the command of Hurry versus Montrose's loyalists. Montrose must delay while reinforcements arrive from the rear, Hurry must advance as quickly as possible. There is no artillery and I didn't use any special/optional rules to keep things simple.

The battlefield looks something like this, with Auldearn at the left in this photo flanked by Castle Hill and with Garlic hill dominating the field to the right. Hurry advances from the right in this picture. 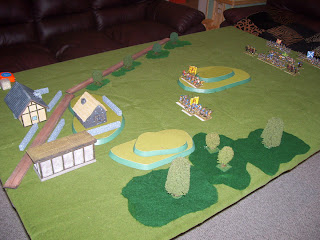 I made the following modifications.
- I allowed infantry and horse units to move at a double rate if they stayed outside of 12" of enemy units. I did this to speed up the movement to contact phases of the game, noting the the battlefield for this scenario is long (6').
- I allowed the general to issue a group order to units within 12", as long as all units did the same simple action (e.g. advance, fire) this enabled them to activate simulaneously. This speeded up things, but also allowed for some powerful combined actions.
- I removed all restrictions from charging. This however made no difference, since both sides chose to shoot  with their foot over melee throughout the game anyway!

Here we have Bob (Montrose) before the first card draw. MacColla's lifeguard sit on Garlic Hill. 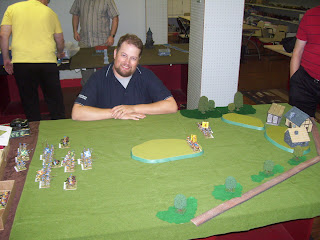 The Covenanters clearly had the run of the early card draws, mainly since most of the Montrose units were still off board. Hurry was able to quicky take Garlic Hill and destroy the lifeguard with musketry, while the Monymore regiment tried to fall back to Castle Hill under pressure from the Covenanters: 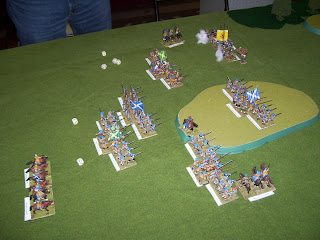 The situation stabilized when Aboyne's dragoons moved onto Castle Hill and the powerful Irish Brigade took up position in Auldearn. The Gordon and Aboyne Horse slipped around the south flank with the Strathbogie and crossed the road to engage the Covenanters. 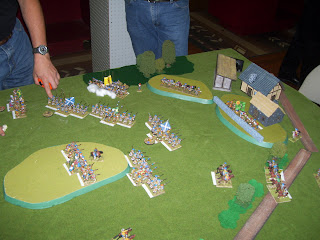 The Lord Chancellor and Findlater regiments push Monymore back to the treeline and eventually force them to route off the board edge through musket fire: 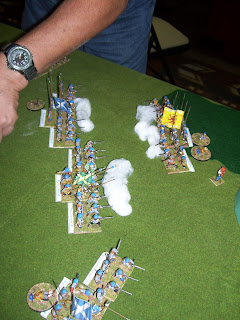 Then the tide turns when the dragoons held onto Castle Hill, followed by the Irish and Strathbogie counterattack on the regiments before Garlic Hill. The presence of Montrose gave this attack extra impetus by allowing for increased actions. Hurry was stretched too thin to manage both his attack on the dragoons and defend from the powerful Irish musketry: 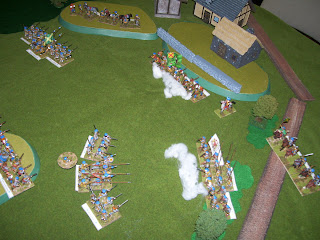 The game ended with a very narrow victory for Montrose as the Covenanters reached their breakpoint first.

I think the guys enjoyed the flow of the game, there were a couple of wiggles to iron out however. I was unsure how to handle drawn melees, for example, and the group order mechanic was great for moving the game along (especially since this scenario features an important attacker traffic-jam) but was potentially too powerful in allowing units to combine fire on a single target. Neither side saw any point in engaging in melee since firing was less risky, so melee needs to perhaps be more decisive.
Posted by Dave at 10:01 PM