The first completed unit for 2012 is this block of 16 dark age warriors from Wargames Factory done in kite shields and with a spanish colour scheme. I plan to use these for Spanish foot for El Cid, and have LittleBigMan Studios El Cid banners on order, but they can also serve as Normal liberi in a pinch: 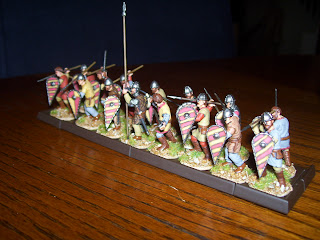 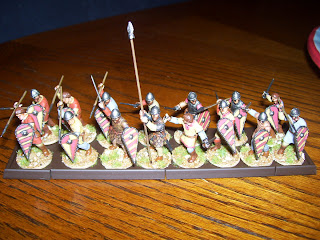 To recap 2011, I painted fewer models than in 2010 (~1,000 versus like ~1,800 in 2011), but there were more 28mm and generally of better quality (hence take more time). Probably the majority were ECW but there were quite a few Dark Age Spanish and Moors for El Cid, and also quite a few GW and Mantic fantasy stuff for WHFB. I played 63 games of DBA (35W-27L-1T) and learned that it is very difficult to win consistently with a light horse army. I also played 14 games of WHFB (12W-2L) using High Elves (unbeatable now I reckon) Brettonians and Vampire Counts.

I would like to play more WHFB and WAB next year if I can coax some of me mates to play more. Saga was another favourite this year, and I ran 4-5 games of Black Powder at the club too (Zulu War, ECW and Napoleonics). I am going to run Hail Caesar next week at the club using some dark age Anglo-Danes and Normans, looking forward to trying it out. I have become a big fan of Rick Priestly rules, I like the Gestalt and simplicity. I also have quite a bit more Western Desert picoarmour to paint up for BKC2, some nice new 1/72 from PSC to try out Kampfgruppe Normandy, and there is always another 15mm DBA army or two for a break.
Posted by Dave at 3:13 PM