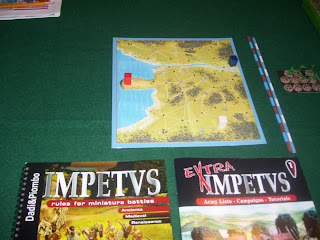 Today Kevin and I playtested the Chevauchee for my second playtest, it was Kevin's first taste of Impetus. I have the map game mechanics worked out after a few queries to the Impetus forum. Kevin drew the English so I played the French.

Kevin's army was gleefully romping across the French countryside, 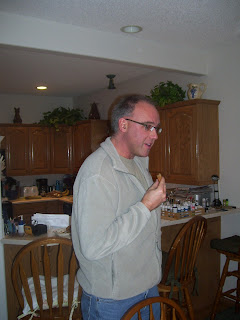 The French rolled an early epidemic while the English drew reinforcements, so time and attrition were working against the French steadily. Once the two French forces combined I decided to force march onto the English and engage, in hindsight this was a mistake. By force-marching I risked a 50% chance of fighting exhausted (all units at -1 VBU) versus his fresh force. As chance would have it we arrived exhausted, and this meant the battle was pretty one-sided. Note to self: only risk a battle at exhaustion if the opponent is also exhausted. 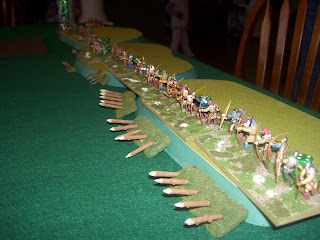 Kevin set up a force of mostly longbow behind stakes with a couple of mounted knights on 3 hills behind 3 ploughed fields. 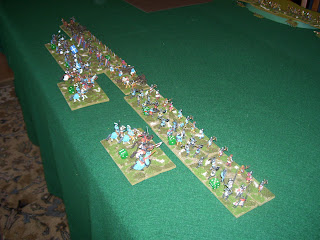 The ill-fated French
I set up a force of foot troops behind crossbow skirmishers and pavise bearing Genoese, supported by artillery and two units of mounted nobles in reserve. I removed two of the ploughed fields (as is the attackers option of moving or removing two terrain pieces) to give my foot troops and clear route to the hills. Kevin then sent his mounted knights around the other flank where eventually we met king versus king. 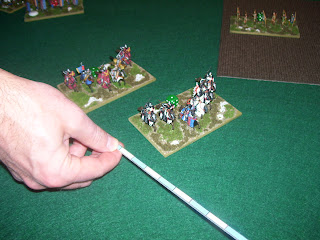 Kevin lining up his knights to charge my flank. 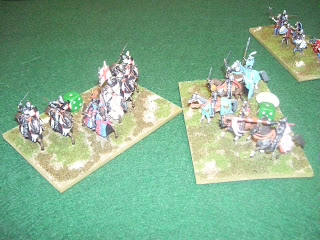 The clash of kings.

Basically, Kevin's longbow shot the lights out of my Genoese and the artillery at long range. They must have been using sniper scopes, that coupled with my explosive cohesion test-rolling. My foot troops eventually did reach his line but fought mostly to a draw, despite the advantage of higher VBU. I think we killed one bow unit. 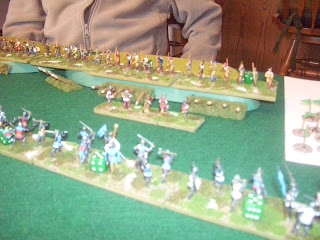 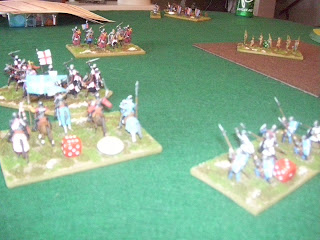 
Eventually my king fell and the English knights had nothing left to kill. The final tally 15:2, English victory.

I think the -1 VDU due to exhaustion was crushing, my force was too fragile and disintegrated under bowfire. So the blunder on the map was the French undoing. Furthermore, I could have perhaps made better use of the terrain- for example, perhaps I should have moved one of his hills to create some blind areas to shield my advance instead of removing the ploughed fields, or even moved the ploughed fields to protect my flank. The battle was lost before it started, perhaps the way it was at Crecy, Agincourt and Poitiers....
Posted by Dave at 12:54 PM