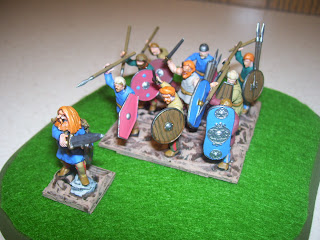 I finished another 10 celtic foot this weekend, I assembled and based them on Friday, then painted these fellas yesterday and today. There are 22 more to paint up and then my 28mm Celtics and Romans are complete!

These guys came out pretty good- the models are actually the German warband bodies with celtic heads. The back 3 ranks are based 3 figs on a 60mm x 20mm and the front figure is the metal Arminius-"Hermann the German" chieftain from Wargames Factory. I quite like him, it's a nice sculpt with a lot of character. You can really tell the difference between the quality of metal and platic in this shot- the detail on Hermann is much deeper. The plastics are just a bit shallow in the folds of cloth and faces, but I still like them and you cannot beat the cost savings relative to metal. 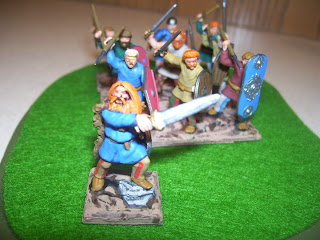 (aside- I wonder if "Herman" is a reference to Herman Rarebell the drummer of the 80s metal band the Scorpions who had a short solo career as "Herman the German"? The sword is definitely in scale for a heavy metal referenced character. Man, I loved the Scorpions!)

Next up: I have a half-dozen Zvezda mounted crossbowmen to finish off for my Hundred Years War French. These will play a role in a cheveauchee mini-campaign for Impetus I am planning to run at the club. It's a snappy little piece found in Supplement 1 for Impetus. More on that later.... 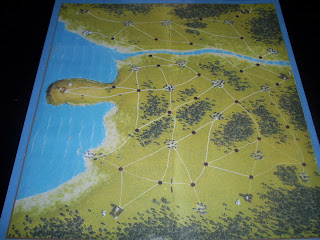