Greeks throw off the Persian yoke of tyranny!

So tonight Mark came over to play a bit of DBA. My Greeks had a bad time of it last time out, losing both games, so tonight I was hoping for some revenge. 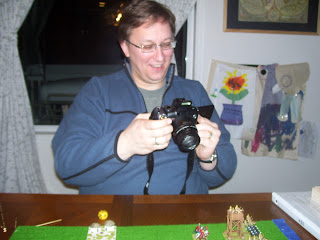 (Mark playing with his camera and not paying attention to how many elements he is putting on the table).

The first game saw my Greeks as defenders, and we threatened a littoral landing on the right flank so Mark deployed defensively: 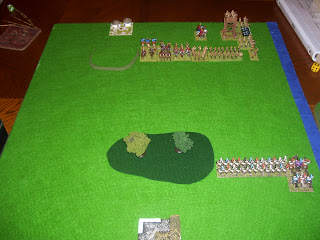 (notice anything fishy about this picture?)

With Mark deploying in a strong defensive position near his baseline, I landed midboard with the plan to join up with the main forces as the right flank- I was going to fight diagonally across the board. 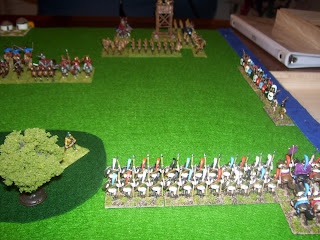 (and that little prick of a psiloi hiding in the bushes eventually killed a hoplite at +2:+2 by doubling me)

I was stuggling to implement my plan, my cavalry had overlaps on bow in the open for 3 successive turns missed every quick kill by rolling 1s, Mark was pipping 6s like crazy, and eventually I lost 4-3 when his warwagon drove along the shore and got in behind my lines shooting us in the arse before I could kill 4 Persians in the trenches.

The second game saw some more dreadful die rolling on my part even though I got the matchups I wanted. I was rolling 1s and 2s everywhere and lost 4-1. I was ready to quit DBA forever. I even threw my die in the garbage, fortunately there were no hammers handy.

Game 3 started, this time it was going better for me and I had him down 3-1. But as I am looking at the board there are still a bloody lot of Persians left to fight. So I count the elements, and there are 11 Persians still on the board and 3 in the dead pile. I ask Mark how many elements the Persians are supposed to have, and it dawns on him- he has been playing with 14 elements all night long (see the first pic above for yourself)!!! He almost soiled himself from laughing so hard. He forgot to bring his rulebook, he explained, so he didn't double check the army composition against his list before we started like he does usually. And I never counted his army either.

So we play one last game, this time 12-12, and the Greeks finally pulled one out 4-1. Two differences. First, we had the same number of elements to start with, second, the die I was using obviously saw what happened to his predecessor, who was festering in a pile of coffee grinds in the bin. So he towed the line and produced reasonable results.

I liberated the offending die from the bin, and put him back in the box to tell his mates to behave better next time or it will be the hammer.
Posted by Dave at 10:49 PM